*This is part 3 of our Game-Based learning series. You can check out part 1 and part 2 here.

The Ultimatum Game is popular in Economics and Psychology courses but it can be applied to a variety of different course subjects like History, Math, and Literature. Below, you will see a few examples of how this game can be used in different educational contexts on VoiceThread.

How does the game work?

The ultimatum game can be played between two players or two teams of players. The mechanics of the game are simple: one side decides how to split a sum of money between both sides and the other side can either accept or reject the offer. Let’s say that side 1 is tasked with dividing a sum of $10. They decide to keep $7 and give side 2 the remaining $3. If side 2 accepts the offer, each side receives their amount. If side 2 rejects the offer, neither side receives any money.

The Ultimatum game is fundamentally about fairness and equality. It helps quantify how much inequality side 2 is willing to accept and at what point they revolt. The game can be played as a one-off decision or an iterated (repeated) game with rounds. The game can be played in isolation or as part of a larger competition between the groups.

One-off version: In this version, side 1 decides how to split the money and side 2 accepts or rejects the offer. After both sides make their choice, the game ends.

Iterated version: In this version, side 1 and side 2 make their choices, the money is awarded, then the teams continue to round 2 and make choices again. This version allows for as many rounds as needed for both sides to start to recognize patterns in the game. After a series of rounds, both sides should begin to see the cut-off point where a specific dollar amount will be accepted or rejected.

Group version: In this version, the sides are not simply competing against each other but against other teams as well. After the specified number of rounds, you can tally up the totals for side 1 and side in each group and compare their totals to the total “winnings” for the other groups. This version promotes more equality and fairness in the decision making process because too many rejections will decrease the totals for both sides in the larger competition.

This game can be created easily on VoiceThread. You can create a VoiceThread with the instructions and enough slides for each group to play their game. Simply upload your slides and record your comments, then drag and drop your VoiceThread into your group!

So how can The Ultimatum Game work in different academic subjects?

Throughout history, groups in power have made decisions that impact groups with less power. We see examples of this when learning about colonialism, governmental systems, trade negotiations, the legislative process to name just a few examples. To use The Ultimatum Game with history classes, decide which role side 1 will play and which role side 2 will play. Maybe side 1 plays the role of government leaders and side 2 plays the role of the people in the country or maybe they each represent different groups from the lessons you are teaching.

Let’s take a look at an example from U.S. history. In this example, side 1 is the King of England and side 2 represents the American colonists in 1773. Side 1 is tasked with deciding how to divide the share of money made from the sale of tea and side 2 has to decide to accept or reject the split. Side 1 (the King) records their choice as a comment on slide 1 of the VoiceThread being used for their game. 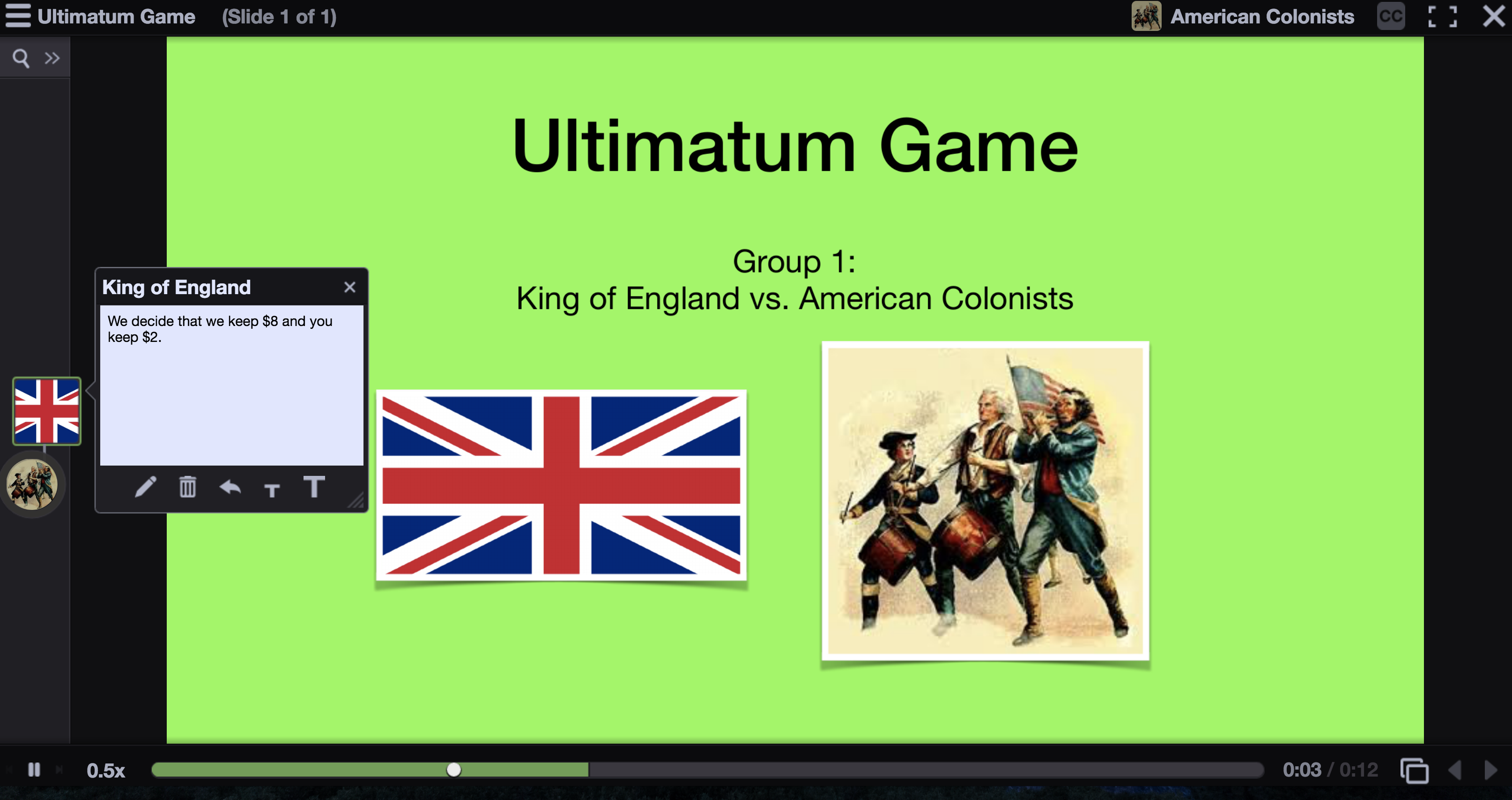 Once they have recorded their decision, side 2 (the colonists) decide to accept or reject it. After the specified number of rounds, the players discuss the game and analyze their decisions on the final slide of the VoiceThread. This discussion can then be guided to compare the mindset of the colonists in the game to the actual events leading up to the Boston Tea Party. Letting your students role-play each side can help bring otherwise dry historical facts to life.

This activity can be a stand-alone math lesson or it can be used with the example above in a cross-disciplinary lesson. Students can play The Ultimatum Game and record the values for each round. They can then create a chart or graph and plot all of the data points. Students can upload their graphs to a VoiceThread and discuss their findings. Teachers can help them analyze ways to maximize the totals for each round and for the full game. This can be coupled with lessons on rate of change, percentages, statistics and more. 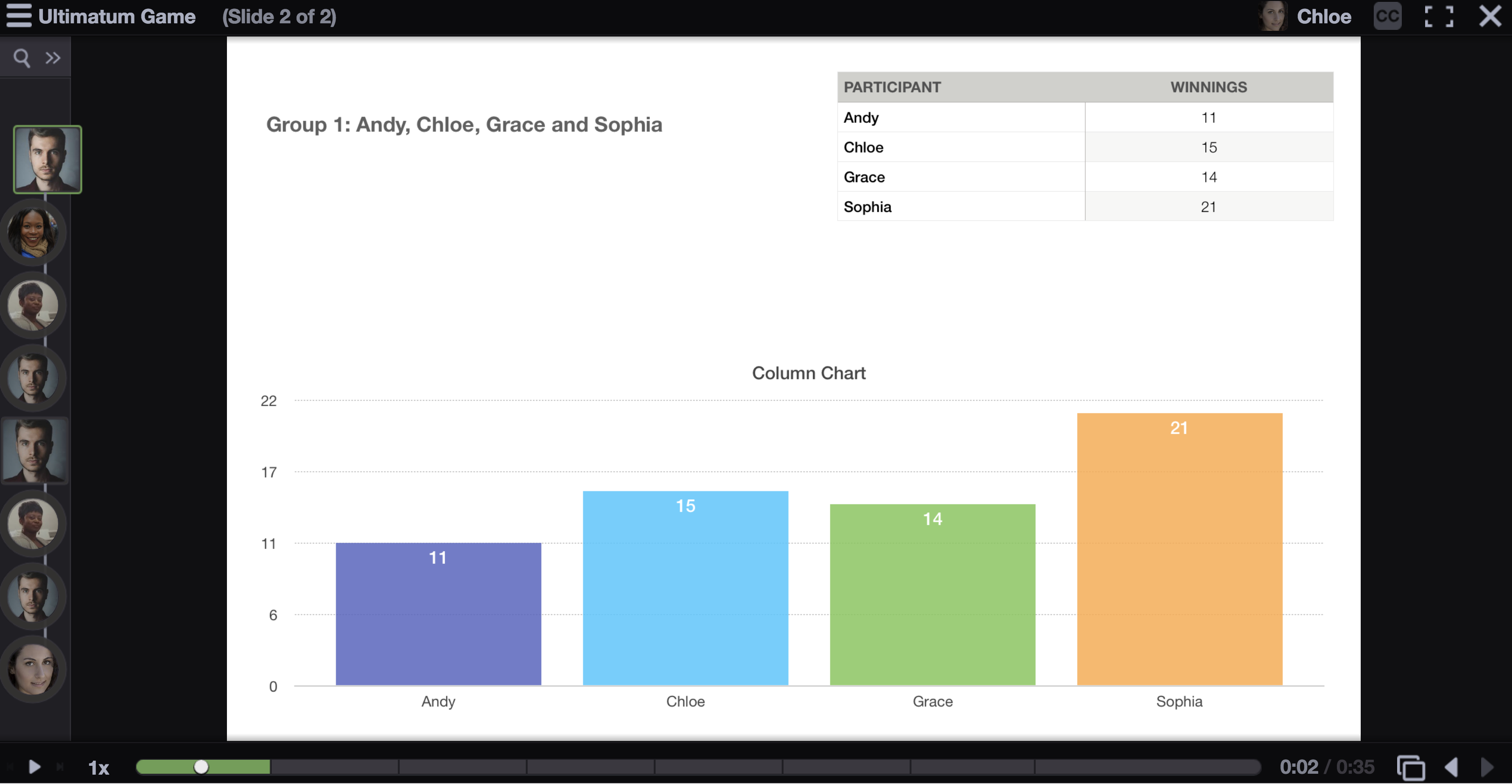 Many of the novels students read in school deal with themes of inequality, conflict, and the choices that inform the character’s decisions. Whether your students are reading Animal Farm, Jane Austen, Boxers and Saints, Lord of the Flies or A Tale of Two Cities, The Ultimatum Game can help shine a light on the motivations of the protagonists, antagonists and everyone in between. You can have the students role play the different characters while they play the game around those central themes. Understanding the motivations of the characters can help students relate to the decisions these characters make and empower students to inhabit the story through their avatars in the novel. Using the final slide in the VoiceThread for discussion of these themes can add a game element to your lesson. 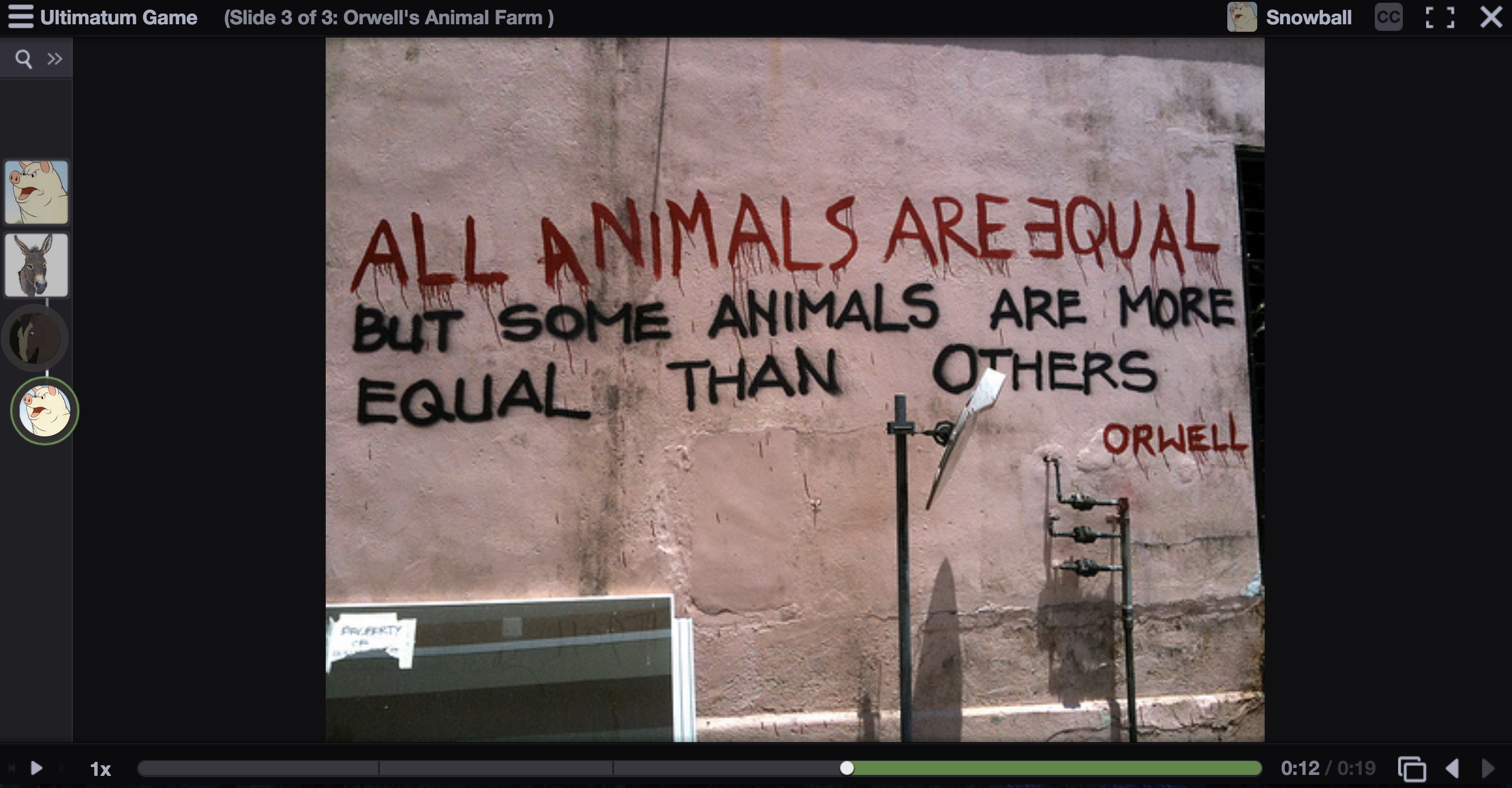 This game has its roots in Economics and Psychology courses, so those teachers can use this game to explore the themes in their own ways too. Setting up the game can be the same process regardless of your subject area, but playing around with the different versions can make the lessons more engaging and fun for everyone.

Let us know if you try gamifying your lessons with The Ultimatum Game! We would love to feature your lesson on our blog.

Enter your email to be notified of new blog posts